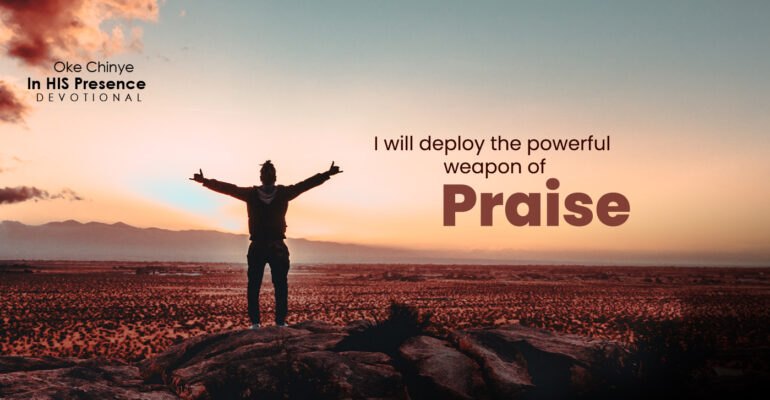 “The weapons we fight with are not the weapons of the world. On the contrary, they have divine power to demolish strongholds” (2 Corinthians 10:4 NIV). Today’s reading highlights a very powerful weapon. The “high praises of God” in the mouth of a believer is powerful and can-do damage to the plans and works of the devil. God delights in and inhabits the praises of his people. What this means is that wherever His name is being praised, He shows up there. And we know that God is almighty, so when He shows up, it is in the fullness of His might and victory is guaranteed. We see this in several instances in the bible.

The people of Ammon, Moab, and Mount Seir came to battle against Jehoshaphat, king of Judah. He feared but proclaimed a fast to seek help from God. The strategy God gave to them was to praise His name. When the people of Judah began to sing and praise God, the Lord set the different armies against themselves, and they destroyed one another. Judah won the war without lifting a finger. The people praised and The Almighty showed up (2 Chronicles 20:1-30).

The city of Jericho was securely shut up; no one could go out or come in. How would the children of Israel capture the city? God commanded Joshua to instruct the men of war to go around the city for six days, with seven priests bearing seven trumpets of rams’ horns before the ark. They were to march around the city seven times on the seventh day, with the priests blowing the trumpets. At the sound of the long blast with the ram’s horn the people were to shout with a great shout. And as they did as there were commanded, the wall of the city fell flat, and people went up into the city, every man straight before him, and they took the city. Again, the people praised, and God showed up (Joshua 6:2-5).

Paul and Silas were put in prison for healing a slave girl possessed with a spirit of divination, who brought her masters great profit through fortune telling. But at midnight, as they were praying and singing hymns to God, there was a great earthquake, such that the foundations of the prison were shaken, and immediately all the doors were opened, and everyone’s chains were loosed (Acts 16:16-26). Praise from the upright is beautiful (Psalm 33:1). Determine in this new year to deploy the powerful weapon of praise.